The causes of hearing loss generally fall into 3 catagories: Genetic, Age-Related and Noise-Induced. RHI and other companies are developing hearing loss therapies to address these 3 causes. 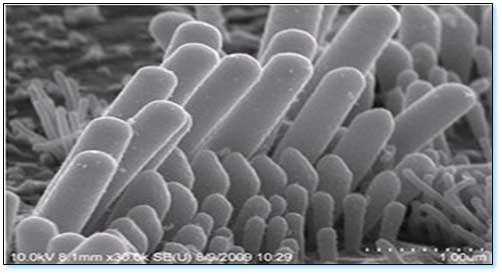 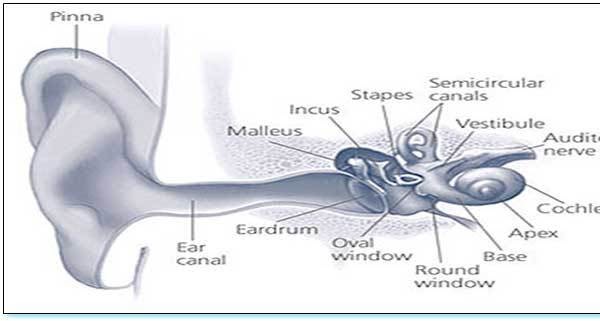 Before we can explain genetic hearing loss it is important to understand how humans hear.

Hearing depends on a series of events that change sound waves in the air into electrical signals. Your auditory nerve then carries these signals to your brain through a complex series of steps.

1.      Sound waves enter the outer ear and travel through a narrow passageway called the ear canal, which leads to the eardrum.

2.      The eardrum vibrates from the incoming sound waves and sends these vibrations to three tiny bones in the middle ear. These bones are called the malleus, incus, and stapes.

3.      The bones in the middle ear couple the sound vibrations from the air to fluid vibrations in the cochlea of the inner ear, which is shaped like a snail and filled with fluid. An elastic partition runs from the beginning to the end of the cochlea, splitting it into an upper and lower part. This partition is called the basilar membrane because it serves as the base, or ground floor, on which key hearing structures sit.

5.      As the hair cells move up and down, microscopic hair-like projections (known as stereocilia) that perch on top of the hair cells bump against an overlying structure and bend. Bending causes pore-like channels, which are at the tips of the stereocilia, to open up. When that happens, chemicals rush into the cells, creating an electrical signal

6.      The auditory nerve carries this electrical signal to the brain, which turns it into a sound that we recognize and understand.

Hearing loss is the most familiar sensory defect present in humans, affecting more than 10 percent of people age 65 and older. In many cases, hearing loss is caused by multiple factors, including genetic and environmental causes. Single-gene mutations can often lead to hearing loss. Genetic factors make some people more susceptible to hearing loss as their genes make them more predisposed due to ageing, loud noises, infections, or drugs. It is estimated that between 30 and 60 percent of age-related hearing loss is due to genetics.

Syndromic: Syndromic refers to a hearing impairment associated with clinical abnormalities. Out of all genetic-related hearing loss, syndromic makes up 15 to 30 percent. More than 400 syndromes are known to include some type of hearing problem. These can include syndromes transmitted in Mendelian or monogenic, syndromes due to chromosomal anomalies, syndromes due to multi-factorial influences, or syndromes due to a combination of these.

Non-Syndromic: Non-syndromic refers to a hearing impairment that accounts for the majority of genetic-related hearing loss, nearly 70 percent. Autosomal-dominant genes account for up to 20 percent while autosomal-recessive inheritance is responsible for more than 80 percent of non-syndromic cases. Less than two percent of all cases are caused by mitochondrial genetic and X-linked malfunctions. 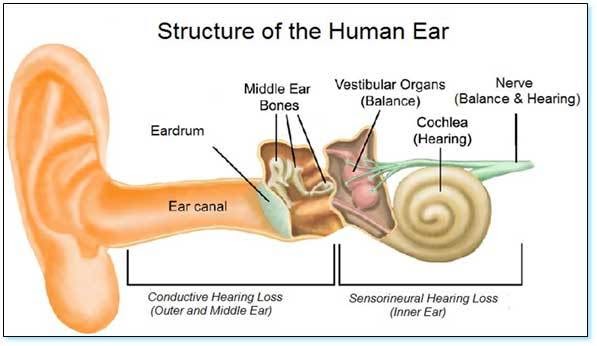 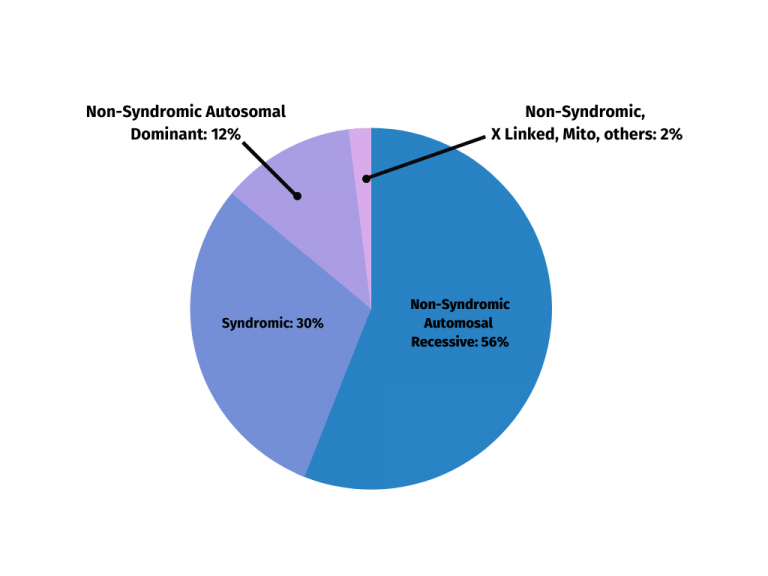 – Postlingual hearing loss occurs after the development of normal speech.

The different gene loci for nonsyndromic deafness are designated DFN (for DeaFNess). Loci are named based on mode of inheritance:

Age-related hearing loss (presbycusis) is the loss of hearing that gradually occurs in most of us as we grow older. It is one of the most common conditions affecting older and elderly adults.

Approximately one in three people in the United States between the ages of 65 and 74 has hearing loss, and nearly half of those older than 75 have difficulty hearing. Having trouble hearing can make it hard to understand and follow a doctor’s advice, respond to warnings, and hear phones, doorbells, and smoke alarms. Hearing loss can also make it hard to enjoy talking with family and friends, leading to feelings of isolation. 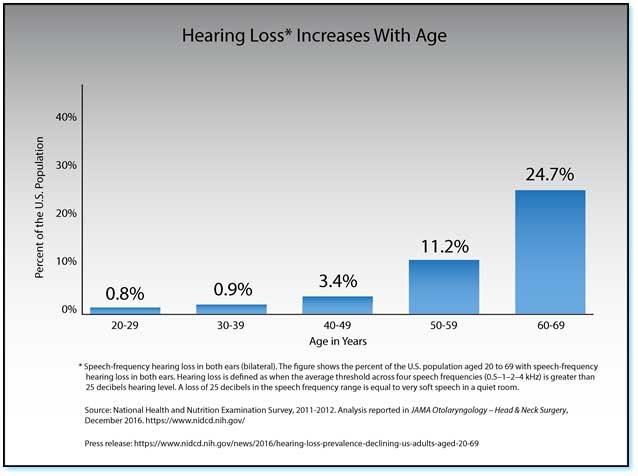 There are many causes of age-related hearing loss. Most commonly, it arises from changes in the inner ear as we age, but it can also result from changes in the middle ear, or from complex changes along the nerve pathways from the ear to the brain. Certain medical conditions and medications may also play a role1.

Why do we lose our hearing as we get older?

Many factors can contribute to hearing loss as you get older. It can be difficult to distinguish age-related hearing loss from hearing loss that can occur for other reasons, such as long-term exposure to noise.

Noise-induced hearing loss is caused by long-term exposure to sounds that are either too loud or last too long. This kind of noise exposure can damage the sensory hair cells in your ear that allow you to hear. Once these hair cells are damaged, they do not grow back and your ability to hear is diminished.

Conditions more common in older people, such as high blood pressure or diabetes, can contribute to hearing loss. Medications that are toxic to the sensory cells in your ears (for example, some chemotherapy drugs) can also cause hearing loss.

What is noise-induced hearing loss?1

Every day, we experience sound in our environment, such as the sounds from television and radio, household appliances, and traffic. Normally, these sounds are at safe levels that don’t damage our hearing. But sounds can be harmful when they are too loud, even for a brief time, or when they are both loud and long-lasting. These sounds can damage sensitive structures in the inner ear and cause noise-induced hearing loss (NIHL).

Most NIHL is caused by the damage and eventual death of inner ear hair cells. Unlike bird and amphibian hair cells, human hair cells don’t grow back. They are gone for good.

NIHL can be immediate or it can take a long time to be noticeable. It can be temporary or permanent, and it can affect one ear or both ears. Even if you can’t tell that you are damaging your hearing, you could have trouble hearing in the future, such as not being able to understand other people when they talk, especially on the phone or in a noisy room.

Regardless of how it might affect you, one thing is certain: noise-induced hearing loss is something you can prevent.

Who is affected by NIHL?

Exposure to harmful noise can happen at any age. People of all ages, including children, teens, young adults, and older people, can develop NIHL. Based on a 2011-2012 CDC study involving hearing tests and interviews with participants, at least 10 million adults (6 percent) in the U.S. under age 70—and perhaps as many as 40 million adults (24 percent)—have features of their hearing test that suggest hearing loss in one or both ears from exposure to loud noise.

Researchers have also estimated that as many as 17 percent of teens (ages 12 to 19) have features of their hearing test suggestive of NIHL in one or both ears (Pediatrics 2011, link is external), based on data from 2005-2006.

This chart shows the prevalence of likely noise-induced hearing loss from 2 time periods in adolescents (12–19 years). Note: I = 95% confidence interval. Data are for adolescents who have an audiometric notch in both ears signifying probable noise-induced hearing loss. Respondents were asked to select only one race prior to 1999. For 1999 and later years, respondents were asked to select one or more races. For all years, the categories black and white include persons who reported only one racial group and exclude persons of Hispanic origin. Persons of Mexican-American origin may be any race.

The 2010 target line represents the goal recommended by the Hearing Health group, which was discussed and approved by the Federal Interagency Working Group for Healthy People 2010. 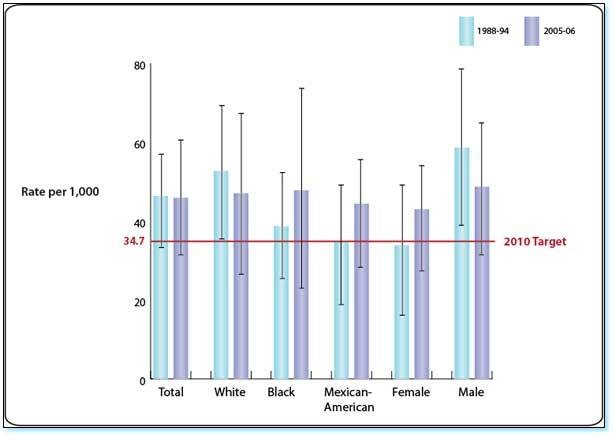 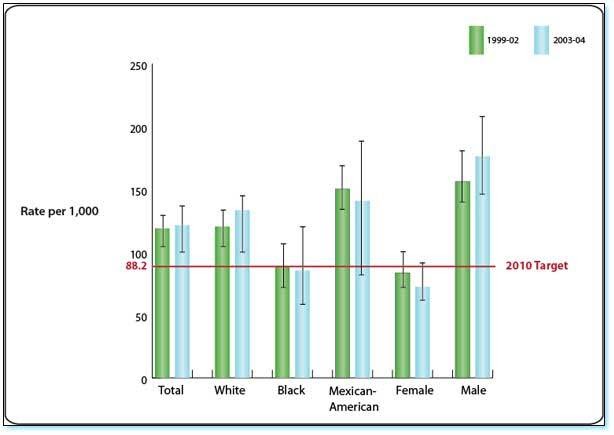 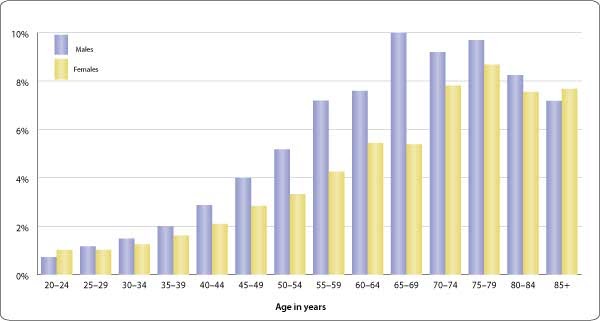 This chart depicts the prevalence of likely noise-induced hearing loss from 2 time periods in adults (20–69 years) by race/ethnicity and sex (gender). Updated data will become available when the new NHANES 2011–2012 audiometric survey for adults is completed. Note: I = 95% confidence interval. Data are for adults who have an audiometric notch in both ears signifying probable noise-induced hearing loss. Data are age-adjusted to the 2000 standard population. Respondents were asked to select only one race prior to 1999. For 1999 and later years, respondents were asked to select one or more races. For all years, the categories black and white include persons who reported only one racial group and exclude persons of Hispanic origin. Persons of Mexican-American origin may be any race.

The 2010 target line represents the goal recommended by the Hearing Health group, which was discussed and approved by the Federal Interagency Working Group for Healthy People 2010.

NIHL can be caused by a one-time exposure to an intense “impulse” sound, such as an explosion, or by continuous exposure to loud sounds over an extended period of time, such as noise generated in a woodworking shop.

Recreational activities that can put you at risk for NIHL include target shooting and hunting, snowmobile riding, listening to MP3 players at high volume through earbuds or headphones, playing in a band, and attending loud concerts. Harmful noises at home may come from sources including lawnmowers, leaf blowers, and woodworking tools.

Sound is measured in units called decibels. Sounds of less than 75 decibels, even after long exposure, are unlikely to cause hearing loss. However, long or repeated exposure to sounds at or above 85 decibels can cause hearing loss. The louder the sound, the shorter the amount of time it takes for NIHL to happen.

Here are the average decibel ratings of some familiar sounds:

Your distance from the source of the sound and the length of time you are exposed to the sound are also important factors in protecting your hearing. A good rule of thumb is to avoid noises that are too loud, too close, or last too long.

What are the effects and signs of NIHL?

When you are exposed to loud noise over a long period of time, you may slowly start to lose your hearing. Because the damage from noise exposure is usually gradual, you might not notice it, or you might ignore the signs of hearing loss until they become more pronounced. Over time, sounds may become distorted or muffled, and you might find it difficult to understand other people when they talk or have to turn up the volume on the television. The damage from NIHL, combined with aging, can lead to hearing loss severe enough that you need hearing aids to magnify the sounds around you to help you hear, communicate, and participate more fully in daily activities.

NIHL can also be caused by extremely loud bursts of sound, such as gunshots or explosions, which can rupture the eardrum or damage the bones in the middle ear. This kind of NIHL can be immediate and permanent.

Loud noise exposure can also cause tinnitus—a ringing, buzzing, or roaring in the ears or head. Tinnitus may subside over time, but can sometimes continue constantly or occasionally throughout a person’s life. Hearing loss and tinnitus can occur in one or both ears.

Sometimes exposure to impulse or continuous loud noise causes a temporary hearing loss that disappears 16 to 48 hours later. Recent research suggests, however, that although the loss of hearing seems to disappear, there may be residual long-term damage to your hearing.

This figure shows age and sex-specific trends in chronic tinnitus, i.e., ringing, roaring, or buzzing in the ears or head that has lasted for 3 months or longer in the past year. This information was collected in household interviews conducted as part of the 1994–1995 Disability Supplement to the U.S. National Health Interview Survey; the data are self-reported and exclude proxy responses.

The overall trend with age shows a marked increase for both sexes, beginning about age 40, peaking between 65 to 79 years, and then declining after 80 years of age. Males show significantly higher rates of tinnitus (p<0.0001) compared to females. The male prevalence is consistently higher from age 40 through 79 years, with the largest differences between males and females occurring from 50 through 69 years of age. One explanation for these differences is that males are more likely to be exposed to loud environmental noise, whether through work or leisure activities. Strong associations between occupational noise exposure and tinnitus are well documented in the literature (Hoffman and Reed, 2004).